The Land Mourns in the Last Days 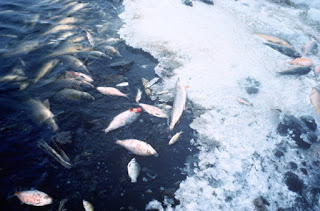 Today I would like to discuss the changes occurring in the earth and its environment, as well as their resulting, adverse effects on wildlife.

A few examples will suffice to make my point. Currently, the earth is experiencing over 3,000 earthquakes per month. That's about 100 earthquakes per day! Giant sinkholes are forming all over the world. These are swallowing up cars and homes and resorts. People have been killed by them. One man was sleeping in his house and the ground opened up and swallowed his house. He screamed for help, but he could not be rescued. Some towns and cities are being plagued by sinkholes, such as Harrisburg, Pennsylvania, USA, which has about 40 sinkholes. Another place called Bayou Corne, Louisiana, USA, has become a ghost town after it had to be evacuated due to a large sinkhole.

There were also a record number of fireballs sighted in the skies worldwide in 2015, as well as a record number of meteorites. As Jesus said, "The stars will fall from the sky, and the heavenly bodies will be shaken." (Mk 13:25, NIV). Likewise, the prophet Isaiah said, "All the stars in the sky will be dissolved and the heavens rolled up like a scroll; all the starry host will fall like withered leaves from the vine, like shriveled figs from the fig tree." (Is 34:4, NIV). Therefore, the signs we are seeing in the sky point to the Lord's imminent return.

Another sign in our environment worth noting is the thinning of the earth's atmosphere. This is according to United States astronaut Scott Kelly, who has just returned from spending a year in space, which is more than any other person has ever been in space. Having orbited the earth over 5,400 times and taken hundreds of photos, he said of the planet's atmosphere in a recent interview, "...it definitely looks very, very fragile and just kind of like this thin film..." Therefore, even the heavens have worn out like an old garment, just as the Scriptures foretold.

For the prophet Isaiah prophesied, "Lift up your eyes to the sky, Then look to the earth beneath; For the sky will vanish like smoke, And the earth will wear out like a garment And its inhabitants will die in like manner; But My salvation will be forever, And My righteousness will not wane." (Is 51:6).

Likewise, the psalmist wrote: "Of old You founded the earth, And the heavens are the work of Your hands. Even they will perish, but You endure; And all of them will wear out like a garment; Like clothing You will change them and they will be changed. But You are the same, And Your years will not come to an end.…" (Ps 102:25-27).

As the earth and sky wear out, our climate is also being severely affected. The Weather Channel documented the top 15 weirdest weather events in 2015, which included Antarctic heat, flooding in one the driest places in the world, record snowfall, record cold temperatures, and record high temperatures. Tornadoes increased in number in the US in 2015. Then there were droughts and wildfires, affecting large regions. In fact, 2015 was among the most damaging year for wildfires ever recorded! There are no indications of these patterns becoming less severe, as scientists predict another year of record heat and more bizarre weather events in 2016.

There are changes happening with the wildlife populations, too. There was a record number of worldwide shark attacks in 2015. The numbers of mass animal deaths are astronomical and rising worldwide. There are millions of fish, birds, and animals dying off in mass. Among the various causes of this phenomenon are starvation, sickness, disease, and suicide. This phenomenon is not localized, but is happening worldwide in 60 to 90 nations or territories. The average number of such "mass die-off" events per year has been around 638 between 2012 and 2014. That's quite a spike from the 144 events recorded prior to that in 2011. And in 2015, the number of events rose even higher to a total of 828 in 96 nations or territories! If this rate of mortality continues, someone has estimated that all the fish in the sea will be gone within 40 years. Furthermore, great numbers of bees are dying off all around the globe. There were 125 known mass death events of bees in 28 countries during the past three years.

Meanwhile, scientists say the Coral Reef is experiencing the longest global coral die off on record, due to a condition known as bleaching. Normally reefs are very colorful exoskeletons built by marine, invertebrate animals, known as corals, which secrete calcium carbonate to form the hard structures. Bleaching occurs when the corals become white or pastel, due to loss of a large percentage of zooxanthellae, a single-celled organism, known as a protozoan. Basically, disease and stress lead to this bleached condition that can kill the coral. In order to understand how serious this is, we need to realize the importance of the coral reef to other marine life.

According to Wikipedia, "Coral reefs...support over one-quarter of all marine species. …Coral reefs form some of the world's most productive ecosystems, providing complex and varied marine habitats that support a wide range of other organisms." Since these reefs are such a vital ecosystem, supporting over 25% of all marine species, it is a foreboding sign when these reefs die off. According to NOAA, "This causes reefs to erode, destroying fish habitat and exposing previously protected shorelines to the destructive force of ocean waves." The current global bleaching event began in 2014 and may continue into 2017.

Putting it All Together
These apocalyptic events that I have just documented are a fulfillment of biblical prophecy, such as the one made by the prophet Hosea, which says, "Therefore the land mourns, And everyone who lives in it languishes Along with the beasts of the field and the birds of the sky, And also the fish of the sea disappear." (Hos 4:3). In this prophecy, there are several things happening -- the land mourns, and everyone living in it is passing away, including the beasts, the birds, and the fish. They are disappearing. This is a perfect description of what we have seen happening during the period from 2011 to the present.

Through the prophet Hosea, the Holy Spirit gives us the reason for these things. He says it is "Because there is no faithfulness or kindness Or knowledge of God in the land. There is swearing, deception, murder, stealing and adultery. They employ violence, so that bloodshed follows bloodshed." (Hos 4:1b-2). The land mourns due to the sin and idolatry that are in it. This is evidenced by the earthquakes, hurricanes, tornadoes, tsunamis, sink holes, droughts, wildfires, and mass animal die offs, including coral reef die offs. Not to mention the thinning of the earth's atmosphere, the record numbers of fireballs, meteorites, extremes of severe weather, and other meteorological events occurring. The whole creation groans and suffers pains right now. And as a result, all life on this planet is being affected.

When you combine all of this with the Fukushima Daiichi Nuclear Disaster and it's dire consequences, as well as the The End Time Plagues that are currently happening, it's clear that we are in a time of distress such as has not occurred since the beginning of the world, which God created, until now and never will be again!

Those with understanding will understand that these are signs of the times we live in. They point to the fact that the Lord Jesus Christ is coming back right away.  But He is only coming for the holy ones, for a Bride without spot or wrinkle. Therefore, prepare in holiness for His return. Repent for the kingdom of heaven is at hand.

Attribution notice: Most Scripture quotation taken from the NASB. Other Scriptures taken from The Holy Bible, New International Version® NIV®.. The photo of numerous dead fish floating in water is in the public domain and was taken by the U.S. Fish & Wildlife Service.

Len Lacroix is the founder of Doulos Missions International.  He was based in Eastern Europe for four years, making disciples, as well as helping leaders to be more effective at making disciples who multiply, developing leaders who multiply, with the ultimate goal of planting churches that multiply. His ministry is now based in the United States with the same goal of helping fulfill the Great Commission. www.dmiworld.org
Posted by Len at 12:09 PM