Brace Yourselves for the Great Shaking 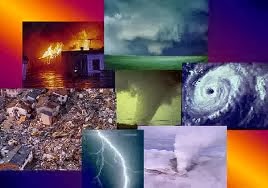 In case you didn't know it, we are about to experience a great shaking, so brace yourselves. I'd like to share with you the following email I received on Wednesday, August 3, 2016 from my friend Faith. She wrote:

"On Sunday evening, July 31, 2016 I was talking with a few friends. We were talking about our lives and what to expect until the time of the Rapture. We were coming to the conclusion that things would continue to be difficult until the Lord comes and intervenes. One friend, named Patti, put it this way. She said, 'I guess we need to BRACE OURSELVES, because there's not going to be resolution until He (Jesus) comes.' I thought that was a very timely comment but an unusual choice of words."

"The next day, Patti called with a report about the first video posted below (see 'Brace Yourselves' video from August 1). In it there are two recent instances of people hearing those very same words. My friend did not remember that she had said the same thing in our conversation the evening before! I had to remind her of it and she was even more amazed! The Lord was giving us the same message."

"Just today, I am finally listening to the video she sent and found another vid with the same powerful warning from a few months ago."

BRACE YOURSELVES!!!! Message given to a friend...Warning
Posted August 1, 2016


"This is not a negative thing to get fearful about. It is our loving Heavenly Father wanting to prepare us for the days ahead. However, it is important that we hear clearly from Him and be obedient to what He is saying. Rejoice! Our redemption draws near. -- Faith."

Putting it All Together
That is the end of my friend Faith's email to me on August 3, 2016. Let me summarize the key events described in her email above, in the following seven points:

1. July 31, 2016 - a sister named Jennifer Beebe on Sunday had a supernatural, nighttime experience, in which she heard the words, "Brace Yourself" (see the first video above, in which Jennifer's friend Rhonda relates her story).

2. July 31, 2016, - a sister named Jennifer Beebe sent a text message to her sister-in-law, who was in a Sunday service at church, telling her about the message she received in point #1 above.

3. July 31, 2016 - Jennifer Beebe's sister-in-law (see point #2 above) showed the text message that she had just received to her husband in church.

4. July 31, 2016 - at the end of the Sunday church service attended by Jennifer Beebe's sister-in-law (see points #2 and 3 above), an elderly gentleman suddenly jumped out of his seat, took the microphone from the pastor, and gave an urgent warning to "brace ourselves." He said, "I just got a message from the Lord, and He said we as Christians need to come together and brace ourselves, that an earthquake or something of that magnitude is coming."

6. August 1, 2016 - On Monday, Faith's friend Patti called her to report the first video above, entitled "BRACE YOURSELVES!!!! Message given to a friend...Warning," which was posted on August 1, 2016. However, Faith's friend did not even remember that she herself had used the same term "brace ourselves" the previous evening (see point #5 above), until Faith reminded her of it.

7. August 3, 2016 - My friend, Faith watched the August 1 video she received from her friend. She also found another video posted April 7, 2016, called "Brace Yourselves" (see second video above). In that video a sister claims that she was sitting in her bed, when she heard the warning loudly and clearly, "Brace Yourselves!" The sister had not even been thinking along those lines, and when she asked the Lord what it was about, she heard Him say, "Extreme turbulence." Faith sent the email to me, the body of which I posted at the beginning of this email.

In this article, I have just documented that there were three different people this past Sunday, July 31, 2016, who neither knew each other nor knew about each other, and independently got the same message from God that we need to "BRACE OURSELVES!!!!" And we also have a fourth person, who independently received that exact same message in April. Moreover, there is the amazing interconnection between these people, which would be statistically impossible if God were not involved. It should be obvious to anyone who is reading this that a great shaking is about to happen. Something big is coming.

It reminds me of a message that Susan Cummings heard from the Lord in her dream called "The Summons". In it she quoted the Lord as saying: "The Great Shaking has only just begun in reality, but I showed you so that you would know My Heart in it. The Shaking is necessary to dislodge all of the deeply entrenched sins and idolatry of the nation. Much is entrenched beneath the land and has been there from the beginning. But, I am visiting the land, and it will be shaken so that it can be freed. The mountains erupted from the great pressures that have been building and from the battle that has been waged over the destiny of your land."

I close with the following passage from the twelfth chapter of the Book of Hebrews:

“See to it that you do not refuse Him who is speaking. For if those did not escape when they refused him who warned them on earth, much less will we escape who turn away from Him who warns from heaven. And His voice shook the earth then, but now He has promised, saying, ‘Yet once more I will shake not only the earth, but also the heaven.’ This expression, ‘Yet once more,’ denotes the removing of those things which can be shaken, as of created things, so that those things which cannot be shaken may remain. Therefore, since we receive a kingdom which cannot be shaken, let us show gratitude, by which we may offer to God an acceptable service with reverence and awe; for our God is a consuming fire.” (Heb 12:25-29)

This passage cautions us that we will not escape if we turn away from Him who warns from heaven. Also see Matthew 24:37-39 and Luke 17:26-30. Everything that can be shaken will be shaken, until only that which cannot be shaken remains. God, His Christ, and His kingdom cannot be shaken. Have you been purified with His holy fire? If not, then ask Him to do so. Be sure you are ready and are found spotless and blameless in Him when the Lord Jesus returns.

Len Lacroix is the founder of Doulos Missions International.  He was based in Eastern Europe for four years, making disciples, as well as helping leaders to be more effective at making disciples who multiply, developing leaders who multiply, with the ultimate goal of planting churches that multiply. His ministry is now based in the United States with the same goal of helping fulfill the Great Commission.
Posted by Len at 12:00 PM