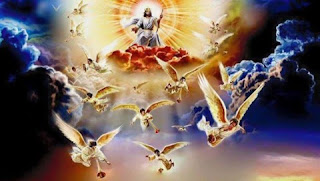 I want to share with you a number of videos about the rapture and Great Tribulation that I found to be encouraging, and which seemed to be genuine. Have a look at them and decide for yourself whether they are from the Lord or not, but regardless of what you think, you need to prepare yourself for the Lord's return. Be sure you are ready! Don't get left behind.

Jesus Told Me He Is Coming Soon!
Dream of a Sentence - Rapture is Imminent
Dream Of Jesus Preaching | He Said Tell EVERYONE I'm Coming SOON!

My Vision and Rapture Dream

Vision of Rapture, Seen by Several, even Pastor

Rapture Dream\Vision From The Lord !! (Judgment Is Upon Us)

"When the Lamb opened the third seal, I heard the third living creature say, 'Come!' I looked, and there before me was a black horse! Its rider was holding a pair of scales in his hand. Then I heard what sounded like a voice among the four living creatures, saying, 'A quart of wheat for a day's wages, and three quarts of barley for a day's wages, and do not damage the oil and the wine!'" (Rev 6:5-6)


Closing Words
Of course, some will scoff and say that none of these visions and dreams are from God, which would mean that all these people coincidentally had dreams and visions about the same topics, which are all coincidentally spoken about in Scripture. I personally believe these dreams and visions are a fulfillment of what the Lord promised in Joel 2 and Acts 2 that His people would have dreams and visions in the last days, when He pours out His Spirit on us. I have also had a rapture dream, which was confirmed by two amazing coincidences on the same day. I have written about it in my article called Are You Rapture Ready?  It carries the same message as the testimonies in the videos above, and is confirmed by the 444 Rapture video above. If you haven't read that dream of mine yet, I strongly suggest it. You'll be blessed if you do!

If you don't know Jesus personally, or if you are away from God, then please repent and return to the Lord today!

Attribution notice: Scriptures taken from The Holy Bible, New International Version® NIV®. Image of Christ's Glorious Appearing may be subject to copyright, used per the Fair Use Act for Educational and Commentary purposes only. No copyright infringement intended.

If you enjoyed this post, you may also like Are You Rapture Ready?, Dreams and Visions: Tsunamis, Asteroids, Nuclear, Earthquakes, Chaos, Prophetic End Time Warnings from Little Children, Wars and Rumors of Wars, The 311 Moment, The Land Mourns in the Last Days, The End Time Plagues, Cosmic Rays Intensifying, Peace, Safety, and the Thief in the Night, The Coming Wrath of God, Fukushima Daiichi Nuclear Disaster, Darkened Skies in the Last Days, my daughter's poem, The Midnight Hour, her video called The Coming, and the other posts in this blog available through the Signs of the Times Directory. You may also access my complete blog directory at "Writing for the Master."

Len Lacroix is the founder of Doulos Missions International. He was based in Eastern Europe for four years, making disciples, as well as helping leaders to be more effective at making disciples who multiply, developing leaders who multiply, with the ultimate goal of planting churches that multiply. His ministry is now based in the United States with the same goal of helping fulfill the Great Commission. www.dmiworld.org.
Posted by Len at 3:36 PM