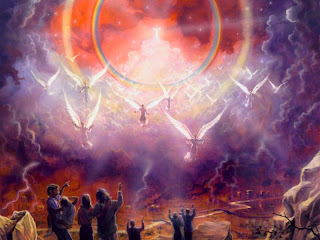 As I have searched the Scriptures over the past twenty five years, one of the things that I have sought diligently to understand is the things to come. I have prayed and studied to be able to know what the sequence of the final events will be. This is the field of theology known as eschatology, or the study of the things to come.

I would like to share with you an outline of end time events by a dear brother, named Oden Hetrick, who went to be with the Lord about a decade ago.  Prior to that, he had been shown things of Heaven over a 40 year period of his life. Here is a shortened version of his outline. I want you to especially note the four main points of his outline in the second paragraph below:

Christians in many lands are suffering tribulation, so what does the Church escape?  Christians of all ages have suffered tribulation -- some more, some less.  But many American Christians know very little about tribulation even though Jesus said, "In the world you will have tribulation." John 16:33.  It is from the GREAT tribulation that we are promised escape and deliverance -- a three and a half year time of wrath at the end of this age.  Revelation 13:5 says it is 'forty-two months.'  Daniel 12:7 says it is 'time, times, and half a time.'  Daniel's seventy weeks include the atonement for iniquity (Dan.9:24).  And Jesus did not fulfill the atonement until after the sixty-ninth week (Dan.9:26).  Jesus' three and a half year ministry fulfilled the first half of Daniel's seventieth week, leaving only three and a half years -- the GREAT tribulation -- when Jesus will punish the wicked.

When Jesus spoke to four of his disciples about the end of the age He described four things, events, that will happen in quick succession just before the GREAT tribulation.


"After Jesus described 'these things' He said,
"When you see these things,
realize that it (redemption/rapture) is near
even at the doors."
Matthew 24:33

"When these things begin to come to pass...
your redemption (resurrection/rapture) is near."
Luke 21:28

"When you see these things come to pass,
realize that the kingdom (City) of God
is near at hand (soon to appear)."
Luke 21:31
Evidently rapture saints will see 'these things' come to pass.  So if you are still here when the world gets dark, don't be afraid; just stay inside, watch, and pray.  The darkness will only last about three days; and according to Jesus, your redemption (rapture) will then be very near.


"It will be at the same time
when Gog comes against the land of Israel,
says the Lord God,
that my fury will be aroused...
on that day
the land of Israel will be greatly shaken...
and everyone on the face of the earth
will shake at my presence (appearing)."
Ezekiel 38:18-20

"When you see Jerusalem surrounded by armies,
then realize that its desolation is near."
Luke 21:20
(This is the abomination of desolation
spoken of by Daniel the prophet in Dan.9:7.)
(Compare Matthew 24:15.)


"Darkness will cover the earth
and gross darkness the people"
Isaiah 60:2

"...a strong people in battle array
...they shall run here and there
in the city (Jerusalem)...
the earth will quake before them:
the sky will tremble:
the sun and the moon and the stars
will be darkened."
Joel 2:5-10

The earth and planets will be moved out of orbit at this time -- in a time frame of a few days.


"I will shake the sky (planet area)
and the earth will be moved out of its place,
in the wrath of the Lord of hosts,
in the day of his fierce anger."
Isaiah 13:13


"The sun will be darkened,
the moon will give no light,
and stars (meteorites) will fall from the sky,
and the powers of the sky (planet area)
will be shaken.  Then
the sign of the Son of Man
will appear in the sky."
Matthew 24:29-30
(The 'sign' is the City and Throne of God.)

"Hereafter you will see the Son of Man
sitting at the right hand of Power
(God on His Throne)
and coming on
(appearing among)
the clouds of the sky."
Matthew 26:64
(see Psa.110:1)


"Then shall appear in the sky
the sign (City) of the Son of Man (Jesus)...
and He will send His angels
with a great trumpet sound,
who will gather together
His elect
from the four winds,
from one end of the sky to another."
Matthew 24:30-31

"Now has come...
the Kingdom (City) of our God,
and the power of His Christ...
therefore rejoice you skies
and you (including raptured saints)
who dwell in them.
But woe to those who
inhabit the earth and the sea!
For the devil
has come down to you,
having great wrath
because he knows
that his time is short
(three and a half years)."
Revelation 12:10

5/  GREAT TRIBULATION
GREAT tribulation follows appearing and rapture.  This is the three and a half year 'day of the Lord' or 'time of wrath' -- the things that raptured saints escape.  (see Luke 21:36)


"The sun will be turned into darkness
and the moon into blood
before the great and terrible
day of the Lord comes."
Joel 2:31

"The sun became black
as sackcloth of hair,
the moon became as blood,
and stars (meteorites) fell to earth
...and the sky (planet area)
was rolled back like a scroll...
and everyone (left on earth)...hid themselves
in caves and rocks and mountains.
And they cried to the mountains
and to the rocks,
Fall on us and hide us
from the face of Him
who sits on the Throne,
and from the wrath of the Lamb.
Because the great day of their wrath
has now come,
and who will be able to stand?"
Revelation 6:12-17

"And he (sea beast) was allowed
to exercise authority for forty-two months
(three and a half years).
And with his mouth
he blasphemed God,
and His Name,
and his dwelling place
and those (including raptured saints)
who dwell in the sky.
And he was allowed
to make war with the saints (on the earth)
and to overcome them."
verse 18 "and his number is 666."
Revelation 13:5-7

So 'these things,' in the question of the disciples, in the answer of Jesus, and 'these things,' that pinpoint the very end of the age, begin with armies invading Israel (Ezk.38).


"When these things begin to come to pass,
lift up your heads and look up,
because your redemption is very near."
Luke 21:28
Our souls must be redeemed now -- washed from sins in Jesus' blood -- our bodies are redeemed when Jesus appears.

"Behold, I come quickly,
and My reward is with Me
to give every person
according to their work.
Blessed are those
who wash their robes
and keep His commandments,
that they may have right
to the tree of Life
and may enter through the gates
into the City."
Revelation 22:12, 14

"Let us therefore fear,
lest a promise being left to us
of entering into His rest,
any of you should seem
to come short of it."
Hebrews 4:1

This is a shortened order of end-time events from the visions and Biblical and scientific studies of Oden Hetrick and his family. [end of excerpt from Oden Hetrick's outline].

Putting it All Together
The four main points of the end times outline that the Lord gave to Oden Hetrick were: 1) Capture of Jerusalem, 2) Worldwide Darkness, 3) His Appearing, and 4) Rapture of the Elect.  Then GREAT tribulation follows appearing and rapture.  I believe we are about to see these four events unfold in rapid succession before our eyes.

The only way any man can stand in the judgment is if he personally knows Jesus Christ as his Lord and Savior. He is the Lamb of God who takes away the sins of the world. The names of those who know Him personally are written in the Lamb's book of Life, which is in heaven. My desire in writing this blog is not to win you over to a particular eschatological point of view. It really doesn't matter if you believe in Pre-Tribulation, Mid-Trib, or Post-Trib. My aim is simply to point you to Jesus. He shall reign forever and ever, and the righteous will reign with Him (Rev 22:5).  He is no longer right at the door, but beyond the door!  He is coming right away!

Author's note: You must take responsibility for your own actions. Nobody knows the day or the hour, and in no way am I date setting. This is only to provide you with information, so that you can make your own decisions, for which you will be accountable to God.  I urge you to read the other recent posts I've written about the imminent return of our Lord Jesus Christ, available through the side bar, especially City in the Sky.  Also please visit Urgent Edition: Imminent Return of  Christ for an important message! You may also visit our Signs of the Times Directory, and access my complete blog directory at Writing for the Master.

Len Lacroix is the founder of Doulos Missions International.  He was based in Eastern Europe for four years, making disciples, as well as helping leaders to be more effective at making disciples who multiply, developing leaders who multiply, with the ultimate goal of planting churches that multiply. His ministry is now based in the United States with the same goal of helping fulfill the Great Commission. www.dmiworld.org.
Posted by Len at 5:57 AM