One example of this in March 2016 is the black beetle plague of "biblical proportions" that has hit the beaches of Argentina. The bugs have come suddenly and covered the ground, baffling experts, and causing people to react in horror. Some are saying that this is a sign the end times are near.

Another example is the bark beetles that are decimating American forests. The problem is so enormous that the US Forest Service has launched an offensive against the beetles. They are consuming tens of thousands of trees. In fact, it is estimated that they can sometimes fell as many as 100,000 trees in one day.

A swarm of black-and-red seed bugs plagued the eastern Sierra Nevada area of California in August 2015. They were of the species Melacoryphus lateralis, and there were piles of them on the ground, which people had to use leaf blowers to clear away. They were getting into everything, including people's food, hair, and bodies.

In March 2013, around 30 million locusts swarmed the cities and farms of Egypt. In September 2013, a swarm of crickets invaded Oklahoma City, Oklahoma. In August 2014, Madagascar's capital of Antananarivo experienced a plague of locusts that descended by the millions and blotted out the skies. In July 2015, swarms of grasshoppers and beetles over Knox County, Texas were so thick they were visible on weather radar. They were flying as high as 2,500 feet. Also in July 2015, plagues of locusts darkened the skies in Southern Russia and threatened crops there. Some were as big as a human finger and they came in clouds, which was literally frightening to the local people.

In the autumn if 2019 the African swine fever turned into a pandemic that began killing millions of pigs around the world. In February 2020 massive locust swarms once again invaded the African continent. It is the worst they have seen in seventy years. These swarms are the size of big cities. In one day, a swarm this size can devour the same amount of food as the entire population of Kenya. According to an expert, it can devour the same amount of food in one day as all the people in New Jersey, Pennsylvania, and New York. Obviously this is threatening the crops of the countries in Africa that are being affected by the plague (see here). Also in February 2020, a massive bat-tornado plague that darkened the skies like a tornado began to severely terrorize Australia. In April 2020, CBN News reported that another wave of billions of locusts were invading East Africa, threatening devastation and starvation.

The prophet Habakkuk prophesied of the end times saying, "Before Him goes pestilence, And plague comes after Him." (Hab 3:5). 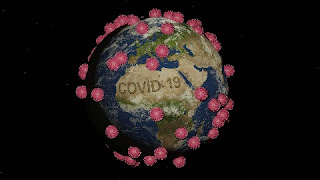 The bugs are a form of pestilence and the viruses are a form of plague. For example, as of February 2020, a deadly coronavirus outbreak (COVID-19) that originated in Wuhan, China, has infected more than 4 million and killed 274,966 people worldwide (latest count here). Tens of thousands of new cases and tens of thousands of new deaths are being reported daily. The virus, which is reportedly a biological warfare weapon and more than ten times more lethal than the seasonal flu, has already spread to at least 202 other countries and territories, including the United States. The World Health Organzation (WHO) has declared the outbreak a pandemic. The US military is getting geared up for it as well. (For more on this pandemic, please see Coronavirus: Origin, Reason, and Remedy).

Moreover, the Ebola virus is another deadly plague that has affected places like the Democratic Republic of Congo (DRC), Africa. It has been reported that infected people have been smuggled into the US through the Mexican border and secretly planted in certain cities, where they could spread the disease to others.

These things are happening in various places around the world just as the Lord said they would. Time is over. Get ready. Jesus Christ is coming back right away, but He is only coming for a holy people -- those living a holy life, so repent and prepare yourself in holiness to meet Him.

Len Lacroix is the founder of Doulos Missions International.  He was based in Eastern Europe for four years, making disciples, as well as helping leaders to be more effective at making disciples who multiply, developing leaders who multiply, with the ultimate goal of planting churches that multiply. His ministry is now based in the United States with the same goal of helping fulfill the Great Commission. www.dmiworld.org
Posted by Len at 12:00 AM