Obama Is The First Beast, And Pope Francis The Second Beast 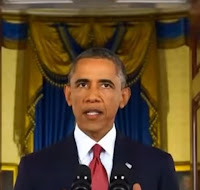 On November 9, 2013, I read that Jesus took Brother Elvi Zapata to the tribulation, in the spirit. By the looking of people’s clothes, he guessed the time was just before the beginning of summer. He heard a huge cracking noise, because of the earthquakes; people everywhere were really scared and desperate. The people that he saw looked like business people that had not had time to seek God.

It was revealed to Elvi that president Obama is the first beast, and Pope Francis the second beast. (see Revelation 13:15-17).  For more see Elvi's website.

What the Lord showed Elvi in the vision I have just described confirms what the Lord also revealed to Dumitru Duduman on Jan 21, 1995, that the Pope will sit on a throne, fighting against the Protestants. In his book Dreams and Visions, he wrote:

"Once again, I heard the voice, but I could not see who was speaking to me.  The voice said, 'Look higher than the black planes.'  When I looked, above the planes, I saw a helicopter which hovered above them.  On the side of the helicopter there was a plank, like on a ship, where soldiers were lined up, dressed in black, all armed the same, and of about the same size.  From the center of the helicopter, a platform began to raise up.  It rose higher than the helicopter itself.
On the platform was a throne.  The Pope was on the throne, yelling with a loud voice, 'I have been given the power to rule the earth and to fight against the Protestants, that I may overtake them.'"

Len Lacroix is the founder of Doulos Missions International.  He was based in Eastern Europe for four years, making disciples, as well as helping leaders to be more effective at making disciples who multiply, developing leaders who multiply, with the ultimate goal of planting churches that multiply. His ministry is now based in the United States with the same goal of helping fulfill the Great Commission. www.dmiworld.org.
Posted by Len at 5:30 AM