The following video was posted just before the 2008 US Presidential election. The Christian man in this video had been walking with the Lord for seven years at the time and said he received this dream about six or seven months prior to posting it, which would have been around March or April 2008. In the dream he saw Obama being sworn in as President of the United States, and he was wearing a very large Egyptian headpiece like the kind the Pharaohs wore, as well as a royal Egyptian outfit. He felt this was a warning to America that Obama was a Muslim and a deceiver. Beneath the video please find the transcript of it.


"Hi, I would like to take this time just to share with you guys a dream that I received from God about six or seven months ago about Barack Obama. I'm a Christian, I've been walking with the Lord for about seven years. I do believe God speaks to men and women through dreams and visions to reveal things, and I had a dream about Barack Obama,

In my dream, it was very real, very heavy. In my dream he had won the election. He was the new President of the United States. And as the new President he was standing in front of the whole world. It was very televised. But what was interesting about this dream is he was wearing an Egyptian outfit like a royalty outfit. But he had one of those large hats on that looked like something Pharaoh would wear -- Egyptian royalty would wear. 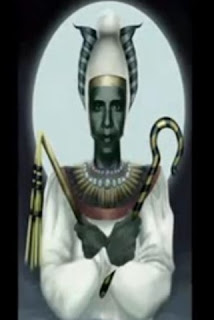 Right there I realized that there were things that in mind were tied to Islam and to the Muslim faith. The biggest part about my dream I remember that I could feel or discern the feeling of the entire American nation and all the American people. In that brief moment the feeling was that the Americans were feeling like 'Wow! We've been deceived,' as they looked at Barack and he was sworn in as President, and he was wearing this Pharaoh outfit, this Egyptian outfit. It's like the whole world felt like 'Wow! We made the wrong choice. We made a bad decision.'

I originally watch this around the time that it was posted just before the 2008 election. But when I went back to review it in 2020, it had received 6,666 views. That was quite ironic. The last comment left on it was from 2013. The dream is one of many that the Lord gave to His servants showing him in the garments of an Egyptian Pharaoh. And even though Obama had not yet been elected, this man saw in his dream over seven or eight months before the election that Obama would become President. Furthermore, many people who voted for Obama later realized that he was a deceiver.

Len Lacroix is the founder of Doulos Missions International.  He was based in Eastern Europe for four years, making disciples, as well as helping leaders to be more effective at making disciples who multiply, developing leaders who multiply, with the ultimate goal of planting churches that multiply. His ministry is now based in the United States with the same goal of helping fulfill the Great Commission. www.dmiworld.org.
Posted by Len at 6:30 AM