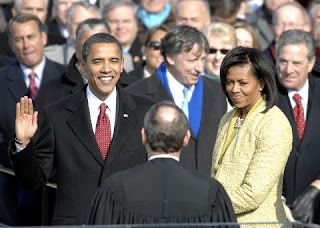 In January 2009, a 48-year old person had a dream about Obama just before his inauguration.  This person wrote: “I had an Obama dream. It took place January 19, 2009, just before the Inauguration. It was strange, so I wrote it in my journal: I dreamed it was Inauguration Day. The sky was gray and snow started to fall, like winter was setting in. I realized it felt like in ‘Narnia’ when the witch was in control-a perpetual winter fell on the land. It was "dark" and there was evil. You couldn't see it, but it was there. That was it. I don't think I actually saw him, in the dream it was Inauguration Day so it was about him.”

Attribution notice: Photo is in the public domain, courtesy Wikipedia.

Len Lacroix is the founder of Doulos Missions International.  He was based in Eastern Europe for four years, making disciples, as well as helping leaders to be more effective at making disciples who multiply, developing leaders who multiply, with the ultimate goal of planting churches that multiply. His ministry is now based in the United States with the same goal of helping fulfill the Great Commission. www.dmiworld.org.
Posted by Len at 1:00 AM