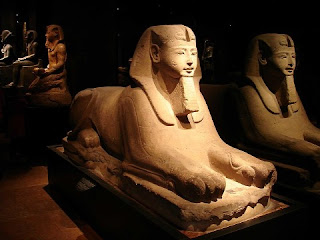 On November 6, 2010, a Christian lady named Sue Love had a vision.  In her blog post called "Sphinx", she wrote:

“I saw a statue of what looked like a lion lying down on the ground (in a sitting position) with his front legs stretched forward. The statue was in the west and it was facing east. Then, I heard in my mind: ‘General McLeod, state of emergency, remove Habeas Corpus, declare national state of emergency.’ I then saw the head of Obama on the lion statue. It reminded me of Egyptian statues I have seen previously with animal bodies and human heads. END I sat down to record this and got ready to Google it when the Lord brought the name ‘Sphinx’ to mind.”

In this dream a national state of emergency was declared, while at the same time Habeas Corpus was removed. According to Wikipedia, "Habeus Corpus is a recourse in law through which a person can report an unlawful detention or imprisonment to a court and request that the court order the custodian of the person, usually a prison official, to bring the prisoner to court, to determine whether the detention is lawful." Therefore, if Habeus Corpus is removed, then the people may be put into prison or other detention facilities unlawfully with no recourse whatsoever. It would seem that this would be a declaration of martial law.

Since Obama's head was on a lion statue and the Lord brought the name "sphinx" to her mind, that once again connects Obama to the Egyptian Pharaohs. According to the Ancient History Encyclopedia, "The sphinx is a mythical creature with the body of a lion, most often with a human head and sometimes with wings. The creature was an Egyptian invention and had a male head." According to the Canadian Museum of History, " In the image of the Sphinx, the pharaoh was seen as a powerful god." So while a national emergency is declared, Habeus Corpus is removed, and martial law is declared, Obama will be seen as a powerful god.

Len Lacroix is the founder of Doulos Missions International.  He was based in Eastern Europe for four years, making disciples, as well as helping leaders to be more effective at making disciples who multiply, developing leaders who multiply, with the ultimate goal of planting churches that multiply. His ministry is now based in the United States with the same goal of helping fulfill the Great Commission. www.dmiworld.org.
Posted by Len at 3:30 AM